Microsoft Windows is a desktop operating system developed by Microsoft since 1983. The latest released version as of April 2021 is Windows 10 October 2020 Update. 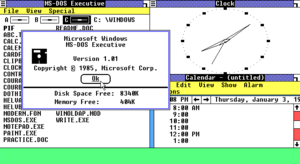 Windows 1.01, the first version of Windows released into retail

Microsoft Windows debuted to the world during the Fall COMDEX 1983 computer expo as an operating environment running on top MS-DOS. The final version of the product with the version number of 1.01 was later released on 20 November 1985 and did not gain much popularity. Windows 1.0 was a cooperative multitasking desktop environment with a tiling window manager. The first versions of Windows used the MS-DOS Executive, which was a simple file manager, as a shell, which is generally the first application ran on startup providing the user experience. Other applications included in the first version of Windows included Calculator, Cardfile, Clipboard Viewer, Clock, Control Panel, Notepad, Paint, Reversi, Spooler, Terminal, and Write. Three minor updates were released in the two following years adding support for more hardware.

A major update called Windows 2.0 was released in 1987 adding features such as overlapping windows. This version also introduced support for the Video Graphics Array and PS/2 mouse (though the IBM OEM of Windows 1.04 includes these features). A separate edition called Windows/386 was introduced that took advantage of the virtual 8086 mode of the then-new 386 processor to multitask MS-DOS applications under Windows; this would later become known as the 386 Enhanced Mode and become the cornerstone of Windows 9x. In later revisions of the Windows 2.0 environment, the original edition was renamed Windows/286.

Windows 3.0 was released in 1990 and became the first widely successful version of Windows. The new features included a revamped user experience consisting of the Program Manager, which allowed easy management of installed applications. A new File Manager was also included to replace the former shell, which was now deprecated. Under the hood, the new Standard Mode was introduced, which took advantage of the protected mode of the 286 and 386 processors. The previously separate 286 and 386 editions of Windows were unified into one version. This version of Windows was able to operate in three modes: Real mode intended for computers with the original 8088/8086 processor, Standard mode using the protected mode feature of the 286 processor, and 386 Enhanced mode combining the improved protected mode of the 386 with its ability to create and manage virtual 8086 machines for MS-DOS applications. 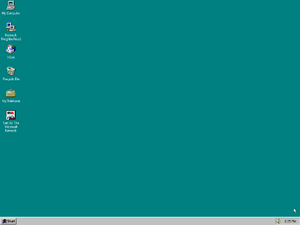 On 24 August 1995, Microsoft released Windows 95, previously known under its codename "Chicago", with a brand new user interface with a Start menu, taskbar, and the desktop, as provided by the new Windows Explorer. Its hybrid 16/32-bit architecture made it possible to make and run 32-bit Windows applications and drivers while keeping a great degree of compatibility with already existing 16-bit ones. Among other improvements in this version was the support for long filenames through an extension to the FAT16 file system.

Windows 95 was the first widespread release of Windows to be packed together with a specific MS-DOS version, however, the old operating system was used only as a bootloader and a compatibility layer for ancient device drivers. Most MS-DOS user applications were either extended with Windows code or entirely replaced with a Windows version, keeping only the ones that were required to run without Windows, e.g. during the OS installation, such as FDISK and FORMAT.

The classic Windows line received a major update on 25 June 1998 with the release of Windows 98, codenamed "Memphis". It was the first version to integrate Internet Explorer deeply into the operating system's user interface as a part of the Windows Desktop Update. Many parts of the UI started using HTML and Internet Explorer's rendering engine to present a web-like user interface. A feature called Active Desktop made it even possible to set a webpage as the desktop background. Under the hood Windows 98 introduced the new Windows Driver Model, which enabled the use of the same drivers on Windows 9x as well as on the radically different Windows NT based operating systems.

In 2000, Windows Me (Millennium Edition), the last release of the classic Windows line was released. It carried over the improvements made to the user interface in its NT-based counterpart, Windows 2000. Windows Me is based on Windows 98, however, access to the real mode MS-DOS was restricted in order to decrease boot time among other changes to the kernel. It was infamously known for its stability problems partially caused by the rushing of its release following the cancelation of the Neptune project. It was replaced by Windows XP in 2001, ending the era of classic Windows.

Windows allowed customization of its user interface since its first versions. Windows 1.0 and Windows 2.x allowed the user to change the color scheme in their Control Panel, however, there was no selection of pre-made color schemes and the user only had the option to reset to the default scheme, which was provided by the installed video driver. This was improved with Windows 3.0 and its new Colors control panel, which added several color schemes for the user to choose from, however, the Windows default preset was still dependent on the type of the graphics card installed. Windows NT 3.1 and Windows NT 3.5x also featured the same Color control panel applet, however, drivers no longer had the ability to override the default color preset.

Windows 95 introduced a new 3D look inspired by NeXTSTEP which initially only made use of solid colors. This was subsequently refined in Windows 98 and Windows 2000 with the possibility to use 2-color gradients for the titlebar. Windows XP introduced a proper theming engine, allowing the use of bitmaps for various user interface elements and saw the first proper visual style, called Luna, come in to use, but users could still switch to Windows Classic if they so chose. Windows Vista introduced the hardware-accelerated Desktop Window Manager, which allowed for advanced effects such as translucent title bars used by the new Windows Aero theme. For users whose hardware couldn't handle Aero, Windows Vista included the software rendered Windows Basic theme.

In 2018, the source code of the Windows NT File Manager (winfile) was released on GitHub under the open source MIT license. This was later followed in 2019 by the Windows 10 Calculator application.

In May 2020, a copy of the source code of Windows NT 3.5 build 782.1 leaked to the 4chan /vp/ board. It is not yet known whether the leaked source is complete. This was later followed in September by the source code of Windows XP Service Pack 1 and Windows Server 2003. The leaked copy is mostly complete, but misses activation components, therefore it is likely that the leak originated from a Microsoft partner who had access to the source code rather than Microsoft itself. This code base had been apparently circulating in online circles since at least 2015.

Version: NT 4.00 in 1995, earlier versions unknown
Developed 1992-1995, scheduled release date unknown.
Development started but project was later scrapped, many of its features were released as part of other versions.

Version: NT 5.50
Developed 1998-1999, scheduled for release in 2001
Canceled in January 2000 and replaced with the Whistler project that would later become Windows XP.

Scheduled for release in 2001
Never left the drafting board, supposed to be a minor update to Neptune, canceled in January 2000.

According to antitrust documents it was already in development before getting canceled in January 2000.

Scheduled for release in 2003-2004
Originally a major update to Longhorn. Allegedly later renamed to Vienna.

Developed 2016-~2019
Scheduled for release in late 2018
A Windows Core OS derivative designed to be the operating system running on the Surface Duo (which was codenamed Andromeda). It was canceled in favour of Android during the device's development.

Version: NT 10.0
Developed ~2017
Scheduled for release in 2018-2019
A Windows Core OS based Windows release that would power older desktops and low performance laptops. It was later canceled for unknown reasons.

Retrieved from "https://betawiki.net/index.php?title=Microsoft_Windows&oldid=118655"
Categories:
Cookies help us deliver our services. By using our services, you agree to our use of cookies.