Windows 3.0 is a major release of Microsoft Windows that was released on 22 May 1990 as the successor to Windows 2.x and was the first truly popular version of Windows. It was a major improvement over Windows 2.x, featuring a completely revamped user interface with the Program Manager and File Manager, replacing the MS-DOS Executive in versions prior.

According to Microsoft, the following are the recommended system requirements for Windows 3.0.[1] This table takes account retail versions; OEM versions will vary depending on the hardware that it was intended to be installed on.

Despite recommending an 80386 processor, Windows 3.0 with Multimedia Extensions can be installed and run in the 8088 real mode and the 80286 Standard mode. However, most of the multimedia features will only function on 286 Standard or 386 Enhanced modes. 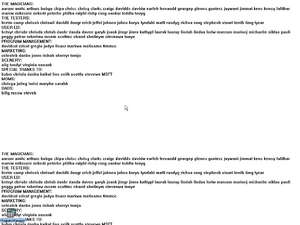 All builds of Windows 3.0 include an Easter egg.[2] In build 14, it was implemented the same way as in Windows 2.x, but the function for the credits window was stubbed out. Build 55 changed the Easter egg entirely to paint the background white with a plaintext string of the credits itself. In build 55, it could be activated with F8, F4, F8, F4, and Backspace in quick succession, but the background would have no text due to the credits string data being empty. The RC2 build changed the hotkey to require the user to type WIN3 then press Backspace while holding F3, and included the actual credits data.

Build strings in the following section are given in the "1.xx" format, as is common in contemporary documentation.