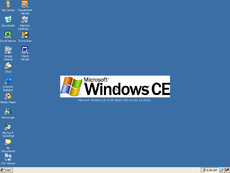 Windows Embedded Compact (formerly Windows CE, where CE stands for Compact Edition or Consumer Electronics) is a real-time embedded operating system by Microsoft. Part of the Windows Embedded platform, Windows CE is designed for use with handheld computers or systems with limited memory and resources.

The system kernel and libraries are used in Windows Mobile and its successor Windows Phone, which are used in smartphones and Pocket PCs, as well as a runtime library for the Sega Dreamcast. Windows Phone 8 abandoned the Windows CE architecture, opting to use the NT kernel as part of the MinWin architecture.

Early versions of Windows CE were inspired by Microsoft WinPad (1994), a scrapped mobile platform for handheld PCs, based on Windows for DOS. Versions of WinPad can still be found in early betas of Windows 95, as well as part of SDKs for Windows 3.1.

Retrieved from "https://betawiki.net/index.php?title=Windows_Embedded_Compact&oldid=218669"
Categories:
Cookies help us deliver our services. By using our services, you agree to our use of cookies.