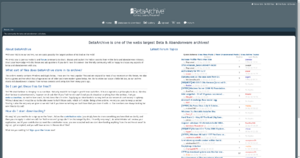 BetaArchive home page as of November 2020

BetaArchive is an online software preservation community, mostly known for its large software archive. It was founded on 17 August 2006 by Andrew "Andy" Whyman following the demise of OSBetaArchive.com and has since then grown to be one of the largest pre-release software and abandonware repositories. The site consists of a forum board, an FTP server and a wiki. BetaArchive hosts over 40,000 releases in its 100 TB archive. FTP access can be gained by registering on the forum and then contributing a release.

In December 2008, the site received a large update dubbed "BetaArchive v2" with the switch from phpBB 2 to phpBB 3. in March 2013, the development of BetaArchive v3 was announced,[1] however, it has been postponed indefintely and version 2.1 was unveiled instead in September 2013, mostly consisting of forum restructuring. In September 2018 the BetaArchive Release Database, an online listing of all releases archived by the community, was publicly launched.[2]

BetaArchive v3 started to roll out on 7 June 2020, starting with the upgrade to phpBB 3.3 with a refreshed responsive theme and a new mobile-friendly site.[3]

Retrieved from "https://betawiki.net/index.php?title=BetaArchive&oldid=220809"
Category:
Cookies help us deliver our services. By using our services, you agree to our use of cookies.