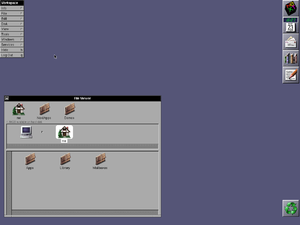 Desktop of OPENSTEP 4.2, the last version of NeXTSTEP.

NeXTSTEP (later known as OPENSTEP) is a discontinued UNIX-based operating system developed by NeXT initially for its proprietary computer systems and later ported to other architectures.

The last officially released version was OPENSTEP 4.2, which was released before Apple's acquisition of NeXT, however, Apple's developer releases of Rhapsody and the subsequently released Mac OS X Server 1.x were still directly based off OPENSTEP. The core technology was later incorporated in Darwin, the base layer of macOS.