WinFS (Windows Future Storage, also known as Integrated Storage and the Windows Storage Engine) was the codename for an advanced storage subsystem slated to be included in Windows Vista. It was designed for persistence and management of structured, semi-structured, and unstructured data.

WinFS is based on modified SQL Server technologies and ran on top of NTFS. WinFS API was included in the System.Storage namespace.

WinFS was first introduced by Bill Gates and Quentin Clark on PDC 2003.

"With WinFS, developers can take advantage of prebuilt data structures in their applications, and extend those structures to handle their specific requirements and add unique value to the application by creating new structures."[1] - PDC 2003

In PDC 2005, a video called IWish showed WinFS-related mockups such as notes and calendar apps as an example of how software developers can take advantage out of it. The beginning of the video explained WinFS with four words: "Unify", "Organize", "Explore" and "Innovate".

WinFS processes existed in Windows Vista (pre-reset) until the last build before development reset, however WinFS folders would not be implemented until build 3706. Later, it was decided on 27 August 2004 that Microsoft would release WinFS as a downloadable data framework after Windows Vista shipped.[2] As a result of this, Microsoft released WinFS Beta 1 to MSDN subscribers in 29 August 2005. This version of WinFS works on Windows XP Service Pack 2 with .NET Framework 2.0 (as a result, it's included in the System.Storage namespace). WinFS Beta 1 was also expected to be put on DVD's in PDC 2005 to be released to the attendees.[3] Quentin Clark, the Director of Program Management for WinFS, mentioned a storage system similar to WinFS would eventually be an integral part of Windows and the first WinFS beta was released in order to get the proper audience and applications that ran on WinFS.[3] Later, Microsoft canceled WinFS in 2006.

After getting scrapped, WinFS features were ported over to ADO.NET Entity Framework, several Windows shell components (such as breadcrumb bar and saved searches) that would make their way into Windows Vista and Microsoft SQL Server.[4]

Bill Gates said WinFS was his biggest disappointment ever in 2013 because of how WinFS was ahead of its time and it will re-emerge.[1]

A traditional NTFS data system would only store the data as a packed stream of bytes. Now, if the data is only recognizable from a data byte standpoint there's no way to identify the data as what it actually is.

The second major problem in the traditional NTFS data system is it's uncategorizable and too hard to find.

If we go back to the Word document example, imagine if there were similar documents to the one we were looking for and they have different names but only one of them is what we're looking for. And they're all created at the same date which leads us to a bigger problem where the date and the title isn't enough to find which document we're looking for. You can't just look at the document itself and call it "That's what I was looking for!" with traditional NTFS unless you spend hours checking it.

The third major problem is it didn't allow files to be stored in multiple places without duplicating the file. Even though you can add aditional metadata to the file, applications often would not be able recognize the additional metadata and would have to rely on NTFS anyways. This problem also wastes disk space.

There are other problems about traditional NTFS such as:

WinFS was supposed to be the solution[edit | edit source]

WinFS was supposed to store all structured, semi-structured and unstructured data at the same time and they would relate in in a central data store where users and apps can access and operate on it. This made the idea of duplication useless since the user can access the same file over different apps and places from the same data store.

With WinFS you don’t need a separate file. Your data can be described as a WinFS schema and instances of that data stored in WinFS itself. You and other apps can operate on this data using the WinFS APIs. If you need to keep your separate file, you can write a metadata handler to promote and demote metadata between your file and the store. - Vijay Bangaru, WinFS Mailbox[5] 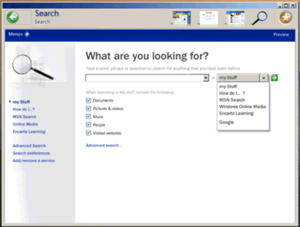 WinFS also helps finding the data quicker as the user can safely find things without needing to know anything technical. Like the Word document we were looking for, you could find the document with a search filter about what you're actually looking for as "a business report: or "a book I finished writing two weeks ago" rather than "Last modified in 19 March 2004" or "Owned by Administrator".

WinFS allowed searches to be more complex, with better handling of cross-referenced non-file-based data such as emails.

WinFS allowed ISV's to define their own data types and provide their schema to the data framework. With "Information Agent", the user can set new properties for items such as appointments, birthdays etc.

In traditional file systems, users create files and store them in folders. In "WinFS," an item can exist in multiple folders. When users create an item, they specify the folder item where the item resides. This creates a holding relationship between the folder item (source) and the newly created item (target). Users can also create additional holding relationships to the same target from some other folder. A folder can also contain multiple items. That is, a folder item contains a collection of holding relationships, each pointing to a different (target) item. For example, a user can include a certain song in several playlists. The music file is not copied or moved to any folder location; it stays where it is and the different playlists keep track of the actual file.

Because non-file-based data like contacts and e-mail messages are cross-referenced with files, users can perform more complex searches. One example could be, "Look for information about Jim from 1987 to 1999.". - The Windows File System, Microsoft User Experience Group[6]

WinFS was also supposed to provide services for apps to use without worrying about proprietary data and the ability to share data between WinFS apps and non-WinFS apps.

Finally, WinFS would stop the need of folders such as "My Documents" and "My Pictures" as WinFS would display those files related to a particular demand of the user.[3] 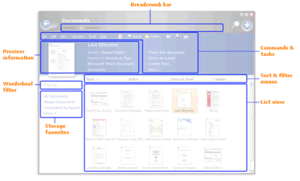 WinFS would include these user interface elements in Windows:

A similar data framework can be found in Cairo known as Object File System and their successors Storage+ and Relational File System.

Retrieved from "https://betawiki.net/index.php?title=WinFS&oldid=239208"
Categories:
Cookies help us deliver our services. By using our services, you agree to our use of cookies.