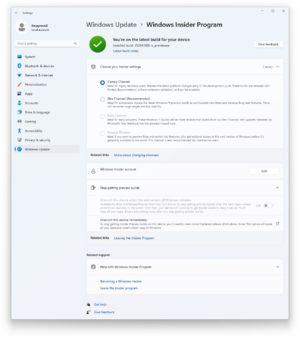 The settings page for the Windows Insider Program in Windows 11

Windows Insider Program is an initiative by Microsoft that allows users of Windows 10, Windows 11, and Windows Server to opt into testing out new, unfinished versions of the operating system. The first build to be publicly released via the Insider Program was Windows 10 build 9841.

The Insider program allows users to pick the builds they want to receive by enrolling to a specific channel. The Insider infrastructure is also used for Microsoft's internal selfhosting effort, with internal channels receiving builds both before and after the public channels; however, they are not a formal part of the Insider program.

Retrieved from "https://betawiki.net/index.php?title=Windows_Insider_Program&oldid=251020"
Category:
Cookies help us deliver our services. By using our services, you agree to our use of cookies.