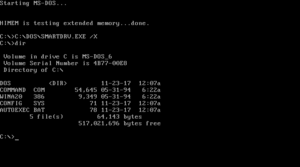 Microsoft MS-DOS is a monolithic operating system by Microsoft. MS-DOS was originally written for the IBM PC and compatible systems, all which targeted the x86 architecture. It remained in development from 1981 until its discontinuation in 2000. There were many programs and graphical shells (such as Microsoft Windows) written for it.

MS-DOS is mainly driven by a text-based interface, using commands (read by an interpreter) to run programs and manage files. Individual programs, however, have access to graphical modes depending on the installed hardware. As MS-DOS is a monolithic operating system, multitasking is very limited and all programs share memory (leading to potential instability), leading it to become outdated as tasks demanded more resources.

A port of the 16-bit MS-DOS was made for 8-bit MSX computers known as MSX-DOS. MSX-DOS is based on the MS-DOS 1.25 kernel and uses the same filesystem.