Windows 3.0 build 14 is the earliest available build of Windows 3.0. It was distributed on two 1.2MB 5.25" floppy disks, which refer to the build as "Microsoft Windows Pre-Release Version 0.1". It can only run on a 386 or better machine with a specific version of DOS, as not using the correct version will cause Windows to either crash, or refuse to launch the shell. It is speculated that this release was heavily rushed, on the basis of an improvised batch file installation script (similar to that of Windows 1.0 DR5 and the Alpha Release) as well as a lack of accessories and applications included in both Windows 2.x and in later builds of Windows 3.0. Deleting WIN.INI will reset the color scheme to the Windows 2.x default. 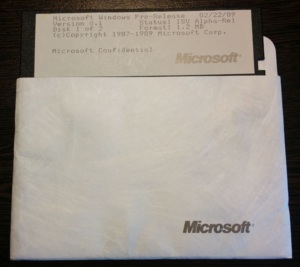 Physical floppies as distributed by Microsoft

Interestingly, this build shows a watermark in the bottom right corner of the desktop, which says "Windows v3.0 Debug Release 1.14". This particular feature has already been removed by build 55 and didn't reappear until a few years later with the checked/debug release of Windows 3.1. The rest of the branding remains unchanged since Windows 2.1, because the entire shell was ported from that version.

The build was shared by BetaArchive member RubyTuesday in 2015 after discovering that their neighbor had owned the build in question.[1]

This build's control menus contain a reference to the Task Manager as well as the Ctrl+Esc keystroke. However, it does not appear to be implemented in this build.

This build requires at minimum a 386 processor, with MS-DOS 3.x (COMPAQ's version 3.31 is recommended) installed. The script will alert you that you need to manually add the instruction to load HIMEM.SYS to your CONFIG.SYS file. Unlike the final release, this build is started by running the executable WIN386.EXE. Should the MS-DOS Executive hang, raise the maximum amount of file handles in CONFIG.SYS (a minimum of 40 is recommended) by adding FILES=40 to it or modifying the existing setting.

The following text was found in WINOLDAP.MOD from build 55:

It is likely that the file comes from an earlier compile of this build, compiled on 20 January 1989.

Retrieved from "https://betawiki.net/index.php?title=Windows_3.0_build_14&oldid=252870"
Category:
Cookies help us deliver our services. By using our services, you agree to our use of cookies.