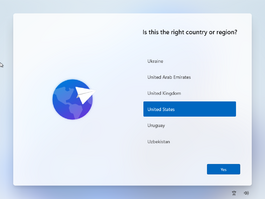 The Out-of-box experience (OOBE), sometimes referred to as the First Time Setup, is a setup wizard related to Windows, macOS and other operating systems which launches after the user installs/resets the OS. The OOBE allows the user of the computer to setup their account, choose their keyboard layouts, and other important information the OS requires.

In Windows NT-based systems, the files for the "Microsoft Out-of-box experience" are located in the oobe directory in %WinDir%\System32, with the main file being msoobe.exe.

Before a real out-of-box experience existed, Windows 3.1 included a tutorial program, which shows how to use the mouse and could be launched during setup.

A similar introducing program is included in Windows NT 3.x, which shows the user what Windows NT is and how to use it. Unlike the tutorial in Windows 3.1, however, it needs to be started from the Program Manager after setup.

After first-booting into Windows 95, a simple welcome program (WELCOME.EXE) starts, which includes tips for using Windows 95 and links to Help topics for new and existing Windows 3.1 users, as well as an option to register to Microsoft. After a second start, there is an option to no longer launch the Welcome program after boot. A similar program is also included in Windows NT 4.0. While it was slightly redesigned and continued to exist in Windows 98 pre-releases, it no longer launches in Windows NT 5.0 Beta 1 builds and returned in Beta 2, albeit completely redesigned. Also a significant interface overhaul received the application in the Beta 2 of Windows 98, where it first played a sample video before playing a sample track. It includes links to the Registration and the Tune-up Wizard, as well as a tour, showing the new features of Windows 98. In Beta 3 builds, there is also a link to the Beta Guide. The Begin button goes through the list, while in the second edition, it changed to a Close button, which simply exits the application.

In Windows Me, it is full-screen and plays again a video showing new features of Windows Me. Then, it turns into an interactive program with more details to those features.

The Welcome program was replaced by the Windows XP Tour in said OS.

The Out-of-box experience was introduced in Windows 98 SE. However, it does not start at first boot since the OOBE was intended to be customized by OEMs which can set the start of the OOBE at first boot.

In Windows Me, the Microsoft Agent character Merlin was introduced. However, it was intended to be a placeholder for OEMs to put in their MS Agent character (like HP did) or modify the text spoken by Merlin. Merlin also appeared as an Office Assistant in Office 2000, 2001, XP, 2003, v.X and 2004 as well as being a Search Companion in Windows XP.

Windows 2000 introduced the "Network Identification Wizard", where the user account is being created. It launches after clean installs starting with build 2072. On upgrades from Windows 9x instead, the user is prompted to set a password for each account, which is the case since build 1796. On upgrades from Windows NT 3.5x and Windows NT 4.0, the user is not prompted either but never due to the user information being transferred from those earlier builds, which is only partially the case for Windows 9x. It no longer launches after clean installs starting with Windows XP build 2276.

The Out-of-box experience was ported to NT-based Windows beginning with Windows XP build 2223. In this build, it has Windows Me branding due to being copied from a Windows Me Beta 3 build without any modification. It also does not close after the final page (it just loops back to start), so its process (msoobe.exe) must be terminated to exit. The OOBE starts after an upgrade starting with build 2257. Merlin was ported with build 2250, albeit being absent in the next builds until build 2410. Also with this build, Windows Product Activation has been implemented into msoobe.exe and can be invoked with the /a switch. However, it was non-functional until build 2428.

The OOBE was overhauled with a Luna-esque design in Windows XP build 2416. Also beginning with this build, it starts after a clean install. Merlin was replaced with the Microsoft Agent character "Question Mark" in build 2469. The music played during OOBE, title.wma, was composed by Stan LePard[1] and first appears in build 2481. It previously appeared in Internet Explorer Starter Kit, and is known as "Windows Welcome music" within the metadata and as "Velkommen" on LePard's SoundCloud.

In Windows Server 2003, the OOBE is non-functional and is only used for Product Activation. Attempts to launch OOBE with msoobe.exe /f lead to a black screen until the process has been killed. Despite the OOBE not being functional, the previous music was replaced with "No Hay Problema" by Pink Martini in build 3615.

Due to being forked from a Windows Server 2003 pre-release, the OOBE in Milestone 3 plays "No Hay Problema" in the background and has not changed much from its inclusion in Windows XP.

With the introduction of WIM-based Setup in Windows Longhorn build 4001 the OOBE received a major refresh. It no longer features background music as well as MS Agent characters and was branded as Windows Setup. Beginning with Milestone 5, the OOBE no longer starts at first boot. This has been changed with the development reset, where it returned to its Windows XP design, but the "Question Mark" character is absent.

After the Omega-13 branch, the OOBE was again absent until build 5259, where it gained a huge redesign. Also, it launched directly after setup and before the last restart. This has been changed with RC1, where it launched after the restart. The final page contains an orb with the Windows logo. Clicking on it or the Start button located in the bottom right of the window leads the user to the login screen. Such page was removed with Windows 7, where it directly leads the user to the login screen after it finalizes the settings. Windows 7 also introduced the new HomeGroup page in OOBE when the user set up their network location as home.

Early Windows 8 builds had two versions of OOBE: a nearly unchanged design of Windows 7 and a new one based on the Metro interface behind Redpill. In Milestone 3, the wallpaper of the old OOBE has been corrupted, but this would not have fixed by Microsoft.

The new Metro OOBE firstly was a full screen version of the old OOBE. This has been changed rapidly, as later builds introduced a color background as well as customization options. The background was at the beginning a gradient blue with flower patterns in the corners of the screen. These have been removed later, and in the Developer Preview the color has become solid and the default is purple, later green.

The Developer Preview added the option to create a Windows Live ID (now known as Microsoft Account). The Consumer Preview added few more customization options into OOBE and switched back to blue as default color. With the Release Preview, the Express Settings have been introduced to speed up OOBE. The RTM changed the default color back to purple.

Windows 8.1 keeps purple as the default background color, but has a different color picker. Other than that, not much has been changed.

The OOBE has not gained many new features, although the background color was changed to blue and can no longer be customized. This design is still included in LTSC releases of Windows 10 and Windows Server 2016 or later.

With Windows 10 Creators Update, OOBE gained huge changes: Express settings have been removed in response to criticism of the operating system's data collection; the user must set up privacy settings manually,[2] and Cortana has made its debut in OOBE.

Windows 10X introduced a new design for OOBE, which is based on the Fluent Design System. After the cancellation of Windows 10X, it merged into Windows 11 with some modifications.

For the Home and SE SKUs of Windows 11, the OOBE requires an Internet connection and a Microsoft account to continue the setup. This requirement is not applied to most of non-Home SKUs, including Pro (up until build 22543), Education and Enterprise. Starting with build 22557, however, it has been applied to the Pro SKU as well. This requirement can be bypassed by the following methods:

In build 22567, a new page has been added to the OOBE for linking Android phones to the device.

Before getting into OOBE, the system will play some Mac OS-relating clips until the user begins to interact with the system.

Apple Rhapsody Developer Release 2 introduced the "Rhapsody Setup Assistant", which is an OOBE-like experience where the OS can be configured. When the Setup Assistant reached its end, it will restart the system. After the release of Mac OS X Server 1.0 (which only supports PowerPC), its name was shortened to simply "Setup Assistant". It was ported to Mac OS X Developer Preview 2.

The Setup Assistant was replaced with a full-screen OOBE. Mac OS X Cheetah, Puma and Jaguar played a short video clip before entering the OOBE, which shows water dropping to promote their new Aqua interface. The latter introduced the ability to register / sign in for a .Mac subscription.

A new clip is used in Mac OS X Panther, and the OOBE now goes completely full-screen on low-resolution displays.

A remake of the clip is used in Mac OS X Tiger. It bears a slightly lighter background as well as some more OOBE-related changes.

Mac OS X Leopard uses a completely new intro clip and changes the appearance of the OOBE, which is now windowed. Also, this version introduced the ability to sign in for a MobileMe subscription, since it succeeded the former .Mac service. Not much has been changed in Mac OS X Snow Leopard.

There are also some Linux distributions (like Red Hat Linux or Fedora) which come with an OOBE. OOBE is usually in distros which use the Anaconda installer.

Retrieved from "https://betawiki.net/index.php?title=Out-of-box_experience&oldid=257335"
Cookies help us deliver our services. By using our services, you agree to our use of cookies.