Windows Product Activation is a DRM technology employed by Windows XP and later that requires the user to activate their copy of Windows online as a means of enforcing the relevant provisions of the license agreement about using the product on multiple computers. The consequences of not activating Windows within a so-called grace period differ with each version and edition, ranging from the user not being able to log in at all or certain features being unavailable, to the user being reminded to finish the activation process via a watermark or a periodic modal warning.

Activation is distinct from registering Windows, an optional service introduced earlier that allowed the user to sign up for notifications about new Microsoft products, updates and other promotions. 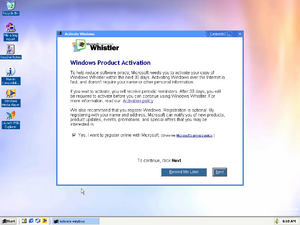 The first build to have Windows Product Activation is Windows XP build 2410, but it is non-functional until build 2428, where it prevents login after 14 days; however, it still can be deactivated over the registry, and Safe mode bypasses it as well. It received its final appearance in build 2465. Windows XP build 2542 extends the grace period to 30 days, although it was reverted back to 14 days in Windows Longhorn build 3683. 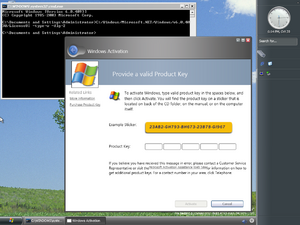 It was rewritten as an Avalon-based application in Windows Longhorn build 4093, but it is largely incomplete. It is included as LicenseUI.exe in the .NET Framework library folder (C:\Windows\Microsoft.NET\Windows\v6.0.4030\), and thus being completely detached from the non-functional OOBE. Previously, Windows Product Activation was not available in componentized builds of Longhorn.

Windows Product Activation can be invoked by launching msoobe.exe with the /A parameter. It offers activation over the internet (which no longer works, as the servers have been shut down) and over telephone (which still works as of 2022), as well as registration at Microsoft. The user can also activate Windows in the OOBE.

Retrieved from "https://betawiki.net/index.php?title=Windows_Product_Activation&oldid=227379"
Cookies help us deliver our services. By using our services, you agree to our use of cookies.