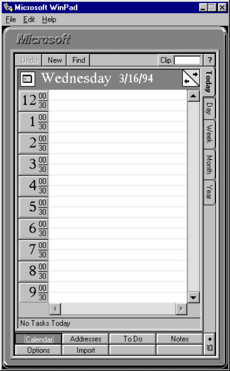 Microsoft WinPad (also known as Handheld Windows) is an unreleased mobile operating system by Microsoft. The system was initially based on Windows 3.1 and later ported to pre-release builds of Windows 95 (then known as Microsoft Chicago) from build 73f to build 275. WinPad-compatible handhelds would synchronize between desktops (using the Switchboard) running Windows 95, and allow e-mail, faxing, file transfer, and task management on the mobile device.

An SDK and debug build exists for Windows 3.1 (and can run standalone in Standard Mode), while the Windows 95 port is newer but more limited. Development on WinPad was dropped before the RTM release of Windows 95. The user interface and architecture later influenced the development of Windows CE.