Task Manager (taskmgr.exe) is a utility that is used to kill unresponsive tasks on Windows NT operating systems as well as monitor the usage of system resources.

It can be opened by pressing Ctrl+⇧ Shift+Esc. It is also accessible from the Windows Security screen shown after pressing Ctrl+Alt+Del, although the keystroke opens the tool immediately on Windows XP with the new login screen enabled. Depending on the operating system version, the taskbar context menu or the ⊞ Win+X menu also contain a command to open the utility.

In its current form, it has been introduced in Windows NT 4.0, where it replaced several tools that provided similar functionality. The application was initially written as a side project by Microsoft developer Dave Plummer, who later contributed the feature to the core operating system after being encouraged to do so by other coworkers. However, earlier Windows NT versions as well as Windows 3.0 and later DOS-based versions also include similar tools. 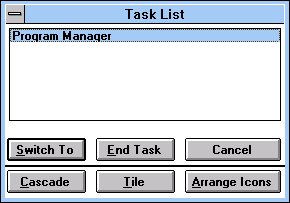 A simple utility called Task List (taskman.exe) was first introduced with Windows 3.0 and could be invoked by double-clicking the desktop. It consisted of a simple list of open windows and several buttons underneath, which allowed the user to rearrange the windows, end a task or close the tool. However, it couldn't be used to kill a frozen task due to the nature of cooperative multitasking.

In Windows 3.1, the ability to press Ctrl+Alt+Del to kill unresponsive tasks was added. It required the system to operate in the 386 Enhanced mode, as it relied on the virtual machine manager to handle the keystroke. Upon pressing the keys, Windows determined whether there was any stuck task and then displayed a full screen prompt that allowed the user to kill such task, return back to Windows or press the key stroke again to reboot the computer. The feature uses the same user interface as a blue screen of death, which has lead to the screen often being confused for one. The message shown when there is no unresponsive task to be killed was written by Steve Ballmer.

The Task List was also ported to Windows NT 3.1, where it gained the ability to run new tasks by the means of a new text box above the original buttons. Similarly to its DOS-based counterpart, users could also press Ctrl+Alt+Del to kill a frozen task, although pressing the keystroke showed a Windows Security prompt, which included an option to show the Task List. It was replaced by Task Manager in Windows NT 4.0, although the original executable was still included with the operating system all the way until Windows XP Service Pack 1.

A more advanced processing program is "Process Viewer" (or "PView"), which is included in both the SDK and the Resource Kit of Windows NT 3.1 and 3.5. Just like the later Task Manager, it can set priorities to tasks and kill them, but a major upsize is the ability of listing processes of remote computers.

During the development of Windows 95, the Task List was redesigned from scratch and renamed to Tasks. The windows were now shown using vertically stacked push buttons with the icon and name, similar to the later introduced taskbar. The action buttons were replaced by menus on top of the window, which also included the option to launch a new task or to exit Windows. Similarly to earlier versions, it could be invoked by double clicking the desktop, although it is not compatible with the Windows Explorer and only works if it's not running.

Windows 95 also updated the Ctrl+Alt+Del interface for killing unresponsive tasks. Pressing the keystroke now opened the Close Program window, which was reminiscent of the previous Task List design with a simple list view of tasks and three buttons, as well as a label that warned the user that pressing the key stroke again will reboot the computer.

It was implemented into the Windows NT systems starting with Windows NT 4.0. Since then, it hasn't seen much changes. Windows XP's Task Manager includes a "Shut Down" menu on the menu bar on some circumstances, having the option to lock the computer/workstation, shut down or restart it or set it into hibernation or sleep mode, as well as log off the current user. Used memory is also now displayed in MB instead of KB.

Task Manager gained a massive overhaul with Windows 8, resulting in some options being moved or renamed. For example, the Processes tab is now named Details and has been moved to the end of the tab selection and the Application tab is now named Processes. It comes also with a lightweight version of itself, which only shows running tasks (without Windows Explorer) and can be expanded to the normal Task Manager with the "More details" option located in the bottom left of the window. It also gained a new option to restart Windows Explorer (when shown on the Processes tab) by selecting the "Restart" button on the bottom right of the window (which is normally an "End Task" button) or right-clicking on Windows Explorer and selecting the Restart option.

The new Task Manager also introduced the Startup tab, which shows apps and services starting automatically with Windows, with the option to disable these. Task Manager inherited this option from the System Configuration tool (msconfig.exe).

Despite the changes introduced with Windows 8, Windows PE and Windows RE still include the older Task Manager.

Task Manager of Windows 10 build 20152.1000 has a bug with a chance of showing a CPU speed of 0.00 GHz on the Performance tab. It may also sometimes show abnormally high values.

With Windows 10 October 2020 Update, Task Manager gained an option to show the utilization and temperature of the GPU.

Windows 11 is able to show processes of Microsoft Edge more detailed, as it now also shows tasks of opened tabs and extensions. Edge and other Chromium-based browsers however have a internal utility which can be invoked by pressing ⇧ Shift+Esc inside of the browser.

Build 22538 introduced a refreshed, theme-aware user interface (based on WinUI framework) to Task Manager, so as to align with the design aesthetics of Windows 11. The tab control was replaced by a hamburger menu, while all of its settings, previously available in the Options menu, were moved to a separate "Settings" page. It was later rolled out to the public alongside the release of build 22557.

The ability to show colors in the heatmap based on users' accent color in the Processes, App history and Users pages has been added in build 22610.

The Task Manager is intended to be used to kill non-responsive tasks or execute new tasks by selecting File → "New task (Run...)" (until Windows 7) or "Run new task" (since Windows 8), which launches a window similar to the Run dialog invoked by ⊞ Win+R, but with an extra option to run the task as an administrator. When the dialog is invoked on the built-in Administrator or the hidden SYSTEM account or in safe mode, it displays a message that the task will be run as an administrator, instead of the optional checkbox.

When selecting Options → "Always on top" it overlays itself over all running windows, even when a new window has been launched. On some circumstances, this option is already enabled.

The Task Manager can also be used for checking performance. When selecting the Performance tab, it shows the utilization and amount of CPU, RAM, plugged disk drives, GPU and the current Internet connection.

On the Users tab, it shows all currently available user accounts. It can also sign them off or disconnect when they are currently signed on.

The Version Reporter Applet (winver) can be directly invoked in Windows 7 and earlier by Help → "About Task Manager". With the redesign in Windows 8, the Help menu has been completely removed, leaving only File, Options and View in the menu bar.

When Task Manager is running, an icon appears in the Systray. Clicking on it will switch Task Manager to the Performance tab.

Retrieved from "https://betawiki.net/index.php?title=Task_Manager&oldid=244955"
Category:
Cookies help us deliver our services. By using our services, you agree to our use of cookies.