Windows Longhorn build 3683 is a Milestone 3 build of Windows Longhorn. It is currently the earliest available build of pre-reset Longhorn, which was originally leaked on 19 November 2002 by the beta group xBetas,[1] with their branding visible in the setup handle and in a modified wallpaper present within the install media (advertising for their now long-gone IRC channel).

This build is one of the earliest to introduce the blue Plex theme, which would be used all the way up to Milestone 6. Builds from this timeframe are also notable in that the window captions are centered when the Plex theme is enabled, which is reminiscent of early Windows versions and which was also later used in Windows 8, Windows 8.1, up to some earlier pre-release builds of Windows 10. The Windows flag on the Start button has been changed to monochrome white in order to fit in the new theme. The login screen was changed to include a clock in the top-right corner and to use a silver and dark blue color scheme, although it still gets to keep the same overall layout as in Windows XP. Windows Explorer was updated with a new Plex-styled task pane and new templates for the My Documents and My Pictures directories. A new file copy dialog has been implemented, although it doesn't use Avalon. The fold/unfold buttons have been added to Windows Explorer when the Show in Groups option is enabled.

A preliminary version of the Avalon user interface framework is included and is used to implement the new Windows Sidebar and Desktop Properties. The Sidebar is empty upon enabling and similarly to later builds, it can be combined with the taskbar, which enables a new Start button design also found in later builds. A new virtual desktops feature is also accessible from the Sidebar. Desktop Compositing Engine is also included with this build, although it is quite unstable and is only known to work on real hardware. When enabled, it renders open windows with a translucency effect.

This is the last build to have a version of Program Manager (progman.exe) that is still usable. Starting with build 3706, it turned into a stub which just redirects to Windows Explorer instead.

Although this build still uses the i386-based installation method used in previous versions of Windows (and as such still utilizes the same minimum requirements as Windows XP), the ability to install Windows by invoking winnt.exe from MS-DOS has been removed, and attempting to do so will result in the following deprecation notice, even if the /I_am_TedM debug parameter is passed over to the command line:

Thank you for trying to install Windows Longhorn 2004 using DOS 1985.

This removal is likely attributed to development of the then-new Windows Imaging (WIM) format, which had been in the works from as early as March 2002.[2]

This build includes an early version of Windows Presentation Foundation (WPF), codenamed Avalon, which unlike versions found builds later than 3713, is built against the original .NET Framework 1.0 and can therefore be installed on Windows XP or other systems supported by the framework.

This build features the new Windows Trust Manager, which can be seen when launching a copy of mytvapp.container obtained from a later build, for example. In this case, it does nothing more than asking the user for permission to install the aforementioned app.

An early revision of WinFS, referred to as "Windows Future Storage" in services.msc and in the "Windows Components Wizard", is also included in this build, but very little in the way of a user interface was included, and as such it appeared to early testers to be nothing more than a service that consumed large amounts of memory and processor time. In reality, WinFS is responsible for a few of the new features found in this build, such as the "My Contacts" library and Pivots. Thus, disabling WinFS will make it impossible to open the aforementioned library, as well as accessing the Pivots functionality.

This build has a new file copy conflict resolve dialog, it can be enabled by setting the DWORD value NewResolve to 1 in HKEY_CURRENT_USER\Software\Microsoft\Windows\CurrentVersion\Explorer.

This build contains a briefcase introduction dialog, which can be opened by running rundll32 syncui.dll,Briefcase_IntroW.[3]

This build features the sidebar, which is disabled by default and can be enabled in the "Taskbar and Start Menu Properties" dialog. Among its options, there is the possibility to toggle its transparency as well as side, other than an "Unlock bar" option in order to resize it and a "Taskbar" one, which is an early implementation of a combined taskbar and sidebar: upon clicking it, the taskbar will disappear and a new Start button will appear at the top of the sidebar; currently open applications will not be displayed though. The sidebar includes several tiles already, which are the equivalent of the gadgets that would much later be seen in Windows Sidebar, such as Clock, DesktopManager (a functionality that would have not made it into a final Windows version until Windows 10), MFU, Quick Launch, Search, SlideShow and UserTile. When the sidebar contains tiles and is set to be minimized, a second tray will appear in the taskbar, showing the icons of the added tiles. Clicking each icon will open the flyout of its associated tile, if it has any.

This build features a normally hidden People sidebar tile. It can be enabled by changing the following values in the registry:[4]

Another hidden sidebar tile, included in this build is a digital clock tile, which also can be enabled by changing the following values in the registry:

This build contains an early prototype of a game manager. Game Definition (GDF) files are recognized by Explorer, and a sample file can be downloaded here.[3] Additionally, it's possible to open a "My Games News" window by running mgui /news general.[5]

Contrary to popular belief, this build already contains Desktop Compositing Engine, but it is unstable and only renders window transparency. It is only known to work on real hardware, and it lacks a user interface as well. It can be enabled on the next startup by adding the following registry key and restarting:

Alternatively, DCE may be started or stopped on request by substituting "StartupOptions"=dword:00000001 with "StartupOptions"=dword:00000002 in the reg key above. After restarting the computer, DCE may be started by entering rundll32 user32.dll,StartDCE in a command prompt window and stopped with rundll32 user32.dll,StopDCE. After stopping DCE it is helpful to drag a few open windows around to redraw the screen.

This build also includes a new Avalon-based display settings applet, which can be accessed by right clicking the desktop and then selecting "Properties". However, this applet is largely incomplete; only the "Desktop Background" and "Use Classic Display Control Panel" options work (the earlier option is partially broken), while "Scale and Resolution" and "Display Connection Settings" crashes the applet and Theme and Screen Saver applets and "More Information" option of Display Connection Properties only lead to a screen saying these components are under construction.

In the Desktop Background, one can select to choose a solid color background, gradient background, rotate to different images (this functionality was under construction) or even make picture collages. The option to change images on the desktop periodically would eventually be a feature that would come in the final release of Vista. Gradient backgrounds made by the applet will be created as a bitmap file named "Wallpaper1".

Much like other Milestone 3 builds, this build contains an early version of the Media Center components, codenamed Freestyle. The components can be added from the Add or Remove Programs in the Control Panel under the name of "Freestyle". Once installed, restart the computer to complete the installation. Media Center is unstable and is very likely to crash instantly on some systems. This also changes the boot screen, altering the "Professional" text to "Freestyle", while the About Program banner changes from "Professional" to "Media Center Edition".

If prompted for the second disk, it should be pointed to the I386 directory of the installation media.

This build, along with the other Milestone 3 builds, contains a new Start Page feature, appearing to be a prototype of a different OOBE to replace the one used in Windows XP. By default, it is not accessible, but Stanimir Stoyanov provided the original Start Page Launcher which can be used to open the Start Page.[6] Due to its earliness, it only contains four tiles that are nonfunctional, being E-Mail, Calendar, Quick Launch, and PromotionsTile.

The Welcome login screen now has the ability to require the user to press Ctrl+Alt+Del to log in to the system. Previously, this was only possible when using the classic login screen.

DiskPart does not work and will tell the user that This version of diskpart is not supported on this platform.

The out-of-box experience may take up a much longer time to initialize unlike other builds.

Once installed, it is impossible to uninstall Media Center. The only way to uninstall this is to reinstall Windows. 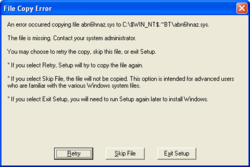 In Display Properties, the Luna theme is referred to as Plex.

Downloading a file will cause Internet Explorer to crash. Additionally, the download animation is broken. This does not affect downloads from a FTP site when the file is drag-and-dropped to the desktop. Also, downloads still work with other browsers such as Firefox and Opera.

Retrieved from "https://betawiki.net/index.php?title=Windows_Longhorn_build_3683&oldid=258637"
Category:
Cookies help us deliver our services. By using our services, you agree to our use of cookies.