Windows 1.0 Alpha Release is a pre-release build of Windows 1.0. Although visually similar to Development Release #5, it features support for running DOS applications under Windows, a monochrome EGA display driver, as well as stability and API improvements. It's also the last known build to include the source code of sample applications, as the May Beta moved them to a separate package. According to a comment in the WININST.BAT file, it was compiled on 31 January 1985.

WININST.BAT lists the hardware and software requirements during installation:

Much like in DR5, installation is done with a batch file, WININST.BAT, that must be copied to your hard drive and started there. Follow the on-screen instructions, when you reach the display adapter selection screen, choose the display adapter you're using (either CGA, Hercules or monochrome EGA). The batch file will start Windows for you the first time, to start it later you need to run the following commands:

When running on DOS 2.x, this build may hang on a black screen when you try to exit Windows.

This build includes a utility for installing the desired display driver, which runs at the end of installation. You can choose between CGA, Hercules and Monochrome EGA drivers. If you want to change the driver later, go to the C:\WINDOWS\INSTALL folder and run INSTALL C:\WINDOWS\TEST, then choose the new driver you wish to install.

To make sure DOS applications work as good as they should under Windows, C:\WINDOWS\TEST must be added to the PATH system variable as well. This ensures the relevant PIF file in the TEST directory is found and used.

The normal arrow cursor is different when a Hercules display is used. The cursor for the icon area is an empty black square instead of the proper cursor when a monochrome EGA display is used. The reason for these differences compared to other display drivers in Alpha and DR5 is unknown.

The standard arrow cursor changes to the up-arrow one when pointing to title bars, menus and some other UI elements. The up-arrow cursor was extensively used for similar purposes in very early builds from around Fall COMDEX 1983 time, but appears to have fallen out of use by the time DR5 was made. The Beta release that followed the Alpha stops using it again.

This build keeps all uses of the Shift key from DR5, as well as adding a new one. Holding down the key while hovering over an application icon will display its name.

PAINT.EXE was present on the second installation disk at some point, but was deleted for unknown reasons.[1] It can be undeleted using the UNDELETE command in DOS. It appears to be identical to the version seen in photos from the May 1985 issue of French computer magazine Science & Vie Micro.

The file PAINT.H from the Windows 2.11 OEM Binary Adaptation Kit suggests that Paint was originally created around June 1984:

In the file FONTTEST.C on disk #3, there is a funny line that includes all letters from the English alphabet:

Similarly to earlier releases, the Alpha Release internally supports color but only ships with monochrome drivers for CGA, EGA and Hercules. Community member jb881122 has ported the 16 color VGA/EGA driver from Windows 2.11 OEM Adaptation Kit to this build, which makes it possible to use this build in color.[2] 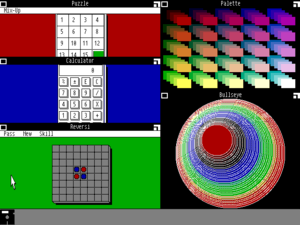 On 5 April 2019, an alleged screenshot of a 28 December 1984 compile of the Alpha Release was posted to BetaArchive.[3] This has later been revealed to be taken from a private video of what is claimed to be another earlier compile of the release, which was compiled on 28 January 1985 and purportedly came on five floppy disks. So far, no proof has been provided for the authenticity of either compile.

Retrieved from "https://betawiki.net/index.php?title=Windows_1.0_Alpha_Release&oldid=163452"
Category:
Cookies help us deliver our services. By using our services, you agree to our use of cookies.