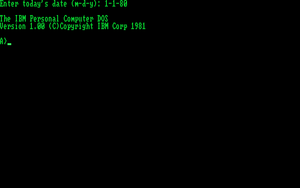 IBM PC-DOS (The IBM Personal Computer DOS, also known as IBM DOS) was an operating system for x86-based IBM personal computers manufactured and sold by IBM. The very first version of PC-DOS was released in August 1981 along with the IBM 5150 PC. Up to 1993, PC-DOS was developed jointly by Microsoft and IBM. However, after the split between IBM and Microsoft, they each maintained their own variant of DOS separately. IBM PC-DOS 7.0 revision 1 (marketed as PC-DOS 2000) was the last full version of DOS released by IBM, although some specialized tools make use of various builds of release 7.1 compiled between 2000 and 2003.

Retrieved from "https://betawiki.net/index.php?title=IBM_PC-DOS&oldid=121162"
Category:
Cookies help us deliver our services. By using our services, you agree to our use of cookies.