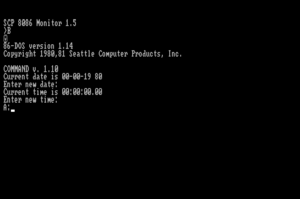 86-DOS, known internally and in official documents as QDOS, Q-DOS, Seattle DOS, and SCP-DOS[1] is an operating system by Seattle Computer Products. It was later licensed[2] and then bought[3] by Microsoft and used as the basis for IBM PC-DOS and MS-DOS.

Development of QDOS began in April 1980 out of the growing need for an 8086 operating system,[4] as CP/M-86 had been delayed since December 1979.[5][6] It was written on a Cromemco Z80 computer[7] running Cromemco's CDOS, in a text editing software called MicroPro WordMaster.[8][9] It was then translated using a Z80 to 8086 translator called TRANS-86 (which was later ported to 86-DOS and renamed to simply TRANS)[8][10] and tested on the Seattle Computer Products 16-bit Computer System.[11] QDOS was ready to ship in July, with Tim Paterson, the creator, spending about half of his time on its development.[4][12] Though the operating system wasn't completely finished, Paterson figured a quick release was more important than adding all the features.[13]

Though some parts of QDOS were written from scratch or by referencing the CP/M-80 manual,[14] others were created in Z80 assembly and then translated using the TRANS command.[15] Paterson claims that QDOS was created with CP/M translation compatibility being the goal[16] - however, these extreme similarities between the OSes caused controversy,[note 1] even going as far as a defamation case.[note 2] It has also been rumored that QDOS' development was aided by not only the CP/M manuals, but the source code as well[17] (or even Digital Research's original OEM translation tools).[18] However, these rumors are both unsourced and unlikely.[note 3]

Paterson later revealed he had mostly worked on hardware before QDOS, and that the idea came during his work on Seattle Computer products' 8086 board.[6] He decided on aspects of the OS because of his experience with North Star and Cromemco's variants of CP/M,[5] UCSD p-System, and Unix.[8][note 4] He also took inspiration for the filesystem from an unfinished 8-bit operating system known as Microsoft Interrupt Driven Asynchronous System (MIDAS[15] or M-DOS,[19] called MDOS before 1980[note 5]), written by Marc McDonald,[15][19] which he learned about during the 1979 National Computer Conference.[8]

Retrieved from "https://betawiki.net/index.php?title=86-DOS&oldid=190194"
Category:
Cookies help us deliver our services. By using our services, you agree to our use of cookies.