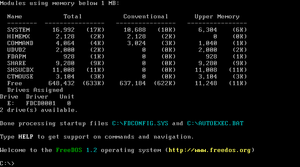 FreeDOS is an open source operating system aiming to create an MS-DOS compatible environment. FreeDOS was originally created on 29 May 1994, as PD-DOS. After two months, it changed its name to Free-DOS, then the hyphen was removed in January 1996. It has been in active development since it was created. Major computer manufacturers, such as Dell and HP, have sold computers with FreeDOS on them. With the introduction of FreeDOS 1.3 RC2, live CD/live booting has been implemented.

Windows 95 or above will not run on FreeDOS without special commands, and 3.1 or below will only run in standard mode.

Retrieved from "https://betawiki.net/index.php?title=FreeDOS&oldid=132636"
Category:
Cookies help us deliver our services. By using our services, you agree to our use of cookies.