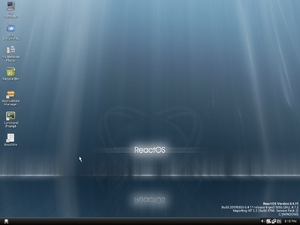 ReactOS is an open source operating system by the ReactOS Foundation. Unlike Unix-like operating systems, ReactOS re-implements the NT architecture and Windows API as a standalone OS. Its goal is to reach program and driver compatibility with Windows. As of 2021, the support level is on par with Windows Server 2003 SP2. The latest version is currently 0.4.13.

In 1996, a group formed under the name FreeWin95 with the intention of making an open source Windows 95 clone. Development on FreeWin95 halted soon after, as source code contributions never materialized. After a short hiatus, the group reformed in 1998 and changed the project's name to ReactOS. Most development is made gradually, with releases set every 2-6 months. A version number is assigned to major releases (such as 0.4.6), while nightly builds and source code builds use their commit number instead.

ReactOS is still considered alpha-quality software and only recommended for evaluation and testing purposes. Installation, hardware detection, booting, and running programs can suffer from bugs. As the operating system is open source, it can be freely built from source code, or downloaded from the nightly builds website.

Virtualization support exists for QEMU, however, it can run on other hypervisors. It's possible to install ReactOS on a physical machine, however, this configuration can be risky.

Retrieved from "https://betawiki.net/index.php?title=ReactOS&oldid=105064"
Category:
Cookies help us deliver our services. By using our services, you agree to our use of cookies.