Although the Desktop Compositing Engine works in this build, it does not enable Direct3D shaders due to a bug. Because the DCE window frames rely on these shaders to function, it is not possible to enable them at this time.

rcimlby.exe (the Microsoft Remote Assistance executable) is supposed to be registered during I386 installation, and can be done so by passing the argument RegServer to it. The main function checks for RegServer and UnregServer, and sets the value of the bool to pass to a function called RegisterEXE accordingly. This build's rcimlby.exe contains a slightly different RegisterEXE function that creates a message box titled "Test2" saying "Test" upon its execution. It also calls GetLastError if the return value of bstrRAName.LoadString is zero, which will not do anything as it does not save the return value of GetLastError. 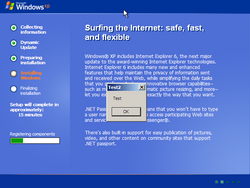 This means for the I386 copy of this build, that message box will popup during installation. It must be closed as soon as possible, as not closing it will prevent further code execution, hence make Setup believe that the registration of rcimlby.exe failed. Setup will then log it as an error and move on, and you will receive a message notifying you of the error at the end of the installation. If the message box is closed after Setup logging it as an error and before the completion of second stage installation, rcimlby.exe will still be registered correctly. The IBS copy of this build does not have rcimlby.exe correctly registered, as Microsoft used unattended installation which means the message box wasn't closed at all, hence the actual registration code was never executed.

This build is also the last known main build with rcimlby.exe.

Safe Mode does not log you on due to the login process change in build 4032, as it will result in "There are no more endpoints available from the endpoint mapper". This was later fixed in Windows Longhorn build 4042 (main).

Retrieved from "https://betawiki.net/index.php?title=Windows_Longhorn_build_4033_(main)&oldid=258648"
Category:
Cookies help us deliver our services. By using our services, you agree to our use of cookies.