Windows 10 build 20277 is the twenty-fourth Insider Preview build of Iron. This build was released on 10 December 2020 to all Windows Insiders on the Dev Channel along with Cobalt build 21277. 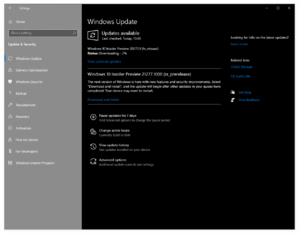 Starting with this build's release, the Dev Channel went under a temporary splitting of released builds. While the channel still received mandatory updates from this version, builds from the Cobalt development cycle would be released at the same time as optional updates, giving Insiders the ability to choose to keep receiving Iron builds or moving forward. For this case, the accompanying Cobalt build was 21277.

Retrieved from "https://betawiki.net/index.php?title=Windows_10_build_20277&oldid=110363"
Cookies help us deliver our services. By using our services, you agree to our use of cookies.