Solaris (originally called SunOS) is a high-end workstation operating system developed by Oracle (formerly Sun Microsystems, Inc. who were bought out by Oracle in 2010). Solaris had many desktop environments. Suntools, was introduced in the mid-1980s for Sun's own Sun-3 workstation. When Solaris 2.0 was released, they started using OpenWindows, then CDE, and then (as now) GNOME.

In 2005, OpenSolaris was released by Sun. When Oracle acquired Solaris, it was announced that OpenSolaris would be discontinued and Solaris 11 would be released under a proprietary license. It's successors are OpenIndiana and illumos. 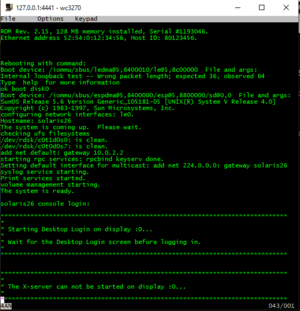 Retrieved from "https://betawiki.net/index.php?title=Solaris&oldid=232203"
Categories:
Cookies help us deliver our services. By using our services, you agree to our use of cookies.