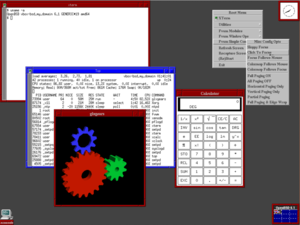 OpenBSD is an open source Unix-like OS created by Theo de Raadt using code from NetBSD in 1995. The current version is 7.0.

In 1993, Theo de Raadt founded NetBSD with Chris Demetriou, Adam Glass, and Charles Hannum, who felt frustrated at the poor quality of 386BSD and believed an open development model would be better. 386BSD was derived from the original University of California Berkeley's 4.3BSD release, while the new NetBSD project would merge relevant code from the Networking/2 and 386BSD releases.

In December 1994, Theo de Raadt was forced to resign from the NetBSD core team, and his access to the source repository was revoked.

In October 1995, De Raadt founded OpenBSD, a new project forked from NetBSD 1.0. The initial release, OpenBSD 1.2, was made in July 1996, followed by OpenBSD 2.0 in October of the same year. Since then, the project has issued a release every six months, each of which is supported for one year.

This article uses material from the Wikipedia article OpenBSD, which is released under the Creative Commons Attribution-ShareAlike 3.0 Unported License (view authors).

Retrieved from "https://betawiki.net/index.php?title=OpenBSD&oldid=187151"
Category:
Cookies help us deliver our services. By using our services, you agree to our use of cookies.