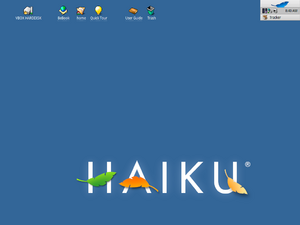 Haiku is a free and open-source operating system with compatibility to BeOS. The development began as OpenBeOS in 2001, but the name was changed in 2004 to Haiku, in order to avoid infringing on Palm's trademarks. The first alpha release was made in 2009, and the first beta was released in 2018. The system is supported by Haiku, Inc.

Haiku development began as "OpenBeOS" in August 18, 2001 after Palm, Inc. bought Be Inc. and discontinued BeOS, leaving users and developers without a viable upgrade path and your programs stranded on an unsupported platform. This project differed from several other BeOS-like projects (such as Cosmoe and BlueEyedOS, both re-implemented Be's APIs on an existing Unix-like kernel) planning an almost complete rewrite of the system, maintaining binary and source-code compatibility. This meant that existing programs for BeOS could run on this system without being recompiled.

The first release of Haiku was made in 2002 as a community-created update for BeOS 5.0.3 that contain open source replacements for a few BeOS components. On April 29, OpenBeOS app_server prototype 5 was released, and was the first release that was able to render windows. In July 2003, the former project leader Michael Phipps founded Haiku, Inc. to support the project and the development of the Haiku operating system.

In 2004, to avoid infringing Palm's trademark of the BeOS. "Haiku" was chosen by an official community vote to reflect the elegance and simplicity that attracted many users to the BeOS platform, and is also a direct reference to the distinctive haiku error messages found in many Be applications. The name was revealed in June on WalterCon.

A number of major milestones were achieved during March to April 2005, such as the first graphical applications with full 2D acceleration to run on Haiku itself, and first use of a web browser (Links) on Haiku. Haiku does not use any code or binaries belonging to Be, Inc., including the graphics driver and network card in the original examples. Another major milestone was reached in July 2005, when the system was able to run the BeOS desktop shell, Tracker.

The development continued until Haiku could now be booted and was semi-usable. However, much work remained before the alpha could be released. Network and USB functionality were under heavy development, and the media_server lagged behind the other components. Haiku was unstable as be expected in a pre-release state. Crashes had been common and no release date had been set. In January 2006, project developer Stephan Aßmus suggested that at the current level of development, R1 was at least a year away, maybe two.

Development on Network and USB stacks continued rapidly, and it was expected if these two last major remaining pieces of the operating system were complete, Haiku would be appropriate for day-to-day use by developers and testers. In February 12, 2008, Haiku reported to became self-hosting, which meant Haiku could be built from within itself.

The milestones continued as time went on, and in January 31, 2009, Haiku obtained a native GCC4 port; this allowed to build modern applications on Haiku at time (like Firefox 3). On July 12, 2009, a prototype version of the FreeBSD WLAN-Stack was ported to Haiku, which enabled unencrypted WLAN connections as a first step.[1]

On September 14, 2009, Haiku R1/Alpha1 was released. It was a huge step for the Haiku project and was a demonstrably working (but still an alpha) version of the system for public download and use, and could run live from the CD (unlike BeOS).

Work continued after this release, and three more Alpha releases will be released between 2010 to 2012. After 2012, the project was given attention to implement a package management system for Haiku with its own PackageFS, 'packages' that could be inserted or removed in real-time, and built-in tools like the HaikuDepot and pkgman, and this major aspiration slowed down the time in between releases. Only the Beta would be released in September 2018, only almost 6 years after the last Alpha. In addition to its packaging features, the first Beta was also notable for a large amount of system improvements and UI changes that had been made in the years between the last Alpha release and itself. After that, two new betas released, Today (September 2021), Beta 3 is the current release for Haiku, and the next release is the Beta 4, currently under development.

Retrieved from "https://betawiki.net/index.php?title=Haiku&oldid=164022"
Category:
Cookies help us deliver our services. By using our services, you agree to our use of cookies.