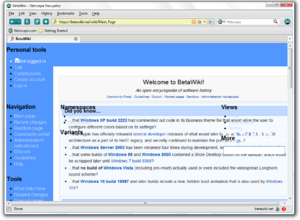 Netscape 9.0 is the last version of Netscape, released on October 15, 2007. Shortly after its release, AOL announced the end of the Netscape browser series on December 28, 2007. Netscape 9.0 officially supported Windows 98 and newer on Windows, and was based on Mozilla Firefox 2.0, which later replaced it. This version of Netscape is notable for not including any newsgroup, instant messaging, or email clients, unlike older releases of the browser.

Retrieved from "https://betawiki.net/index.php?title=Netscape_9.0&oldid=140910"
Cookies help us deliver our services. By using our services, you agree to our use of cookies.