Difference between revisions of "User talk:BF10"

I don't like the Fall Creators update since it made many computers unstable or even bricked it. For the wiki itself, yes I noticed it got a lot buggy, like being unable to upload images once and several downtimes. BF10 (talk)

I will aim on getting these added later. I am kinda restricted on VMs, which makes it pretty hard to add all of them at once. I will try testing the Windows 2000 builds later, but the fact it requires floppies and are hard to install makes it hard to add. I should aim for getting that done (after many attempts of trying to install Longhorn Server 4028 all failing from setup not loading or BSoD on boot after setup). BF10 (talk) 23:34, 17 April 2018 (BST)

I wish it was, but editing another person's userpage is against the rules so it is kinda painful to actually do. I will plan on adding many at the same time to so there isn't a huge reason to edit it every time I upload one. BF10 (talk) 23:32, 20 April 2018 (BST)

Did you know Windows 10 has a Safe to Shutdown screen? -- User:yellows111

Even if that is true, I can get an actual image with QEMU, and it shows the text — Preceding unsigned comment added by Yellows111 (talk • contribs)

Where did you find LH 4005 WinUnleaked screenshots?

I thought you got those from WinUnleaked and not BA. I'll remove that speck of information. At least TCB has a lot of images of the build including the setup. BF10 (talk) 14:51, 28 August 2018 (BST)

A Channel9 video featured this build at about its half, the buildtag is not visible (really low quality) but they said that they will feature this build at gnomedex the next day. Interesting! This video actually showcases the new IE 7 beta. --ATeamInc (talk) 18:37, 29 August 2018 (BST)

Add a summary for your edits

Although it is not necessary, it helps me not having to look onto each edit and makes revising WAY easier. Please add a minor summary at least for your edits. Thanks. --ATeamInc (talk) 19:45, 4 September 2018 (BST)

Help with adding images to articles...

Hello, so I have been trying to upload some images to a page I am currently creating, but I'm having bit of a problem with doing that. Yes, you probably recognize me from WinWorld, I came here because I just like to try out other sites, such as this one. Back on topic, I'm posting here because last night I uploaded an image for a page I'm creating about a Windows XP build, and my image got deleted as I found a message by you, BF10, about the file deletion, and because you seem to be an expert at working with articles on this Wiki. So what I'm asking is, how do I embed files in BetaWiki articles?

P.S. I didn't resize the screenshot, I cropped it to just the desktop using Adobe Photoshop, because the snapshot feature in VirtualBox, the hypervisor I was using, wasn't working at the time, so I just took an entire screenshot of my screen using the Windows+PrtScn key trick, and then cropped the image. --JonathonWyble (talk)

First of all, when you upload files you must give it unique name, and not something common like "Image.jpg", "Desktop.png", or "Longhorn4094.png". I also recommend that your images are in true scale and is not a jpg. Secondly, after you upload an image you must add it to an infobox or gallery and add its filename onto there. For example:

...to add desktop and About dialogs into an infobox. If necessary, you can also use

Something regarding my pictures

In response to a recent message I got from you, regarding pictures I took for Windows 2000 Build 1509, I am posting here to tell you what really happened. I was not using Bochs, I was using VirtualBox, but I didn't have 256 colors. Plus I couldn't get the virtual machine to be 1024x768, because VirtualBox VMs are always locked at 640x480. I tried installing VirtualBox Guest Additions, but I couldn't. So what I'm saying is, I was just doing what I was doing because it was all I got. Therefore, I may install guest additions for VirtualBox, so that I can take screenshots of my VMs in a better quality. But when I tried to install them, it just kept halting. So what I'm asking is, how exactly do you install VBox Guest Additions the proper way? --JonathonWyble , 30 October 2018

Okay, I will install Guest Additions for VirtualBox, this time I will do it the proper way. I got the tip from the VirtualBox forums. Also, VirtualBox actually can emulate OSes older than Windows XP, I've seen a lot of VirtualBox tutorials that show proof. Anyway, I will update the screenshots on the Windows 2000 Build 1509 article, and these images will be in 256 colors. --JonathonWyble (talk) 5:00, 31 October 2018 (UTC)

It can EMULATE them but their DRIVERS aren't supported with anything before XP. --LilShootDawg (talk) 13:13, 31 October 2018 (GMT)

I'm now your friend because I have seen so many of your contributions. You have made BetaWiki better. Now, if you're going to be away for a while, I'll be your substitute. LarryTN7722 (talk) 12:49, 21 November 2018 (GMT)

About your user page

In your favourite betas section, you listed sp1 as your favourite windows vista beta, but sp1 isn't a beta?--SArAmTaCoJeSUs (talk) 23:23, 23 November 2018 (GMT)

One: Changed boot screens or versions caused by utilities such as regedit or TweakNT isn't allowed. That means that images of builds proven by using TweakNT isn't allowed.
Two: The image isn't even properly cropped, and it's not any better to use the Windows Longhorn ones too. BF10 (talk) 23:05, 11 December 2018 (GMT)

Screenshots of modded versions of Windows are not allowed here. This includes TweakNT. What don't you understand? --AlphaBeta (talk) 23:22, 11 December 2018 (GMT)

No matter what you call that, it is modded Windows Server 2003, not Windows XP Professional. TweakNT is a modding tool. Sticking a BMW logo on your Toyota doesn't make it a BMW, does it? There was no official 3790 i386 built from the srv03_rtm branch, okay? These screenshots are not acceptable for BetaWiki. --AlphaBeta (talk) 23:28, 11 December 2018 (GMT) 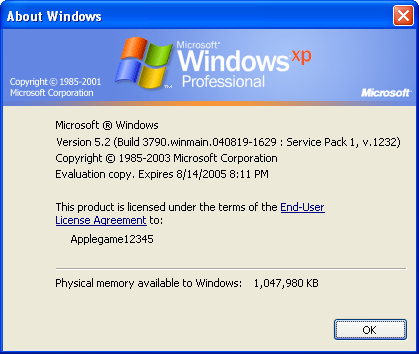 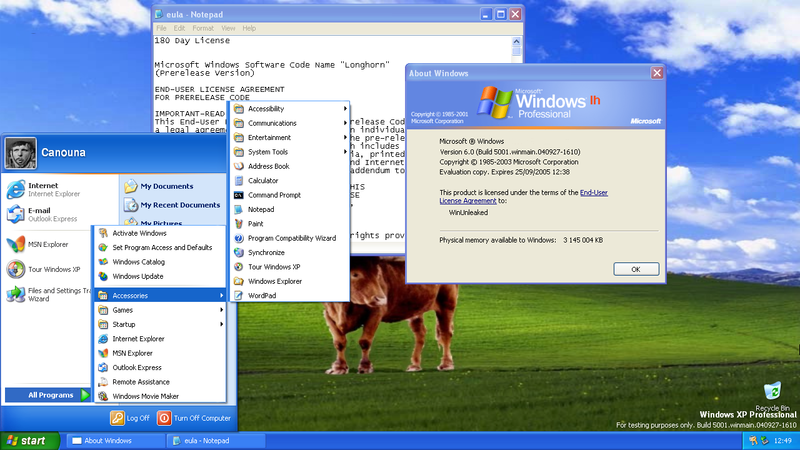 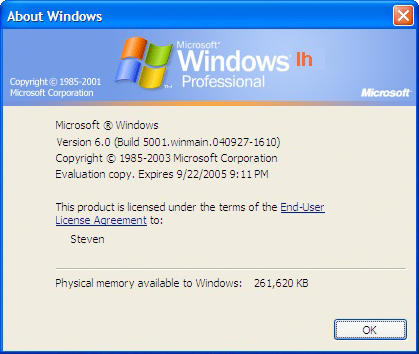 Like what AlphaBeta said, you're still not proving any point here.

In fact at this point I don't think I can take you any more seriously. At this point all you do is post nearly-useless images of you using a TweakNT-modified build and a bunch of irrelevant Windows Longhorn builds as well, clogging up my wall. Please do not continue or you might face consequences. BF10 (talk) 23:50, 11 December 2018 (GMT)

About your delete request

Hey, I'm wondering if you (or someone else whos an admin or has permissions) can put the logo of Norton Commander on the main page?

I can't really find the logo either.

And he also insulted Sebono just because he made a mistake.--MCpillager (talk) (Sandbox) Me discover fire, invent wheel, build server. 12:00, 22 April 2019 (UTC)

Ok, it's been awhile since I have installed it, and I thought it was Mac OS X Server. Thanks for clarifying. Also are you sure the date is correct? — Preceding unsigned comment added by Meow2004 (talk • contribs)

Can someone please confirm?

I do not have any real computers that I can test any Vista build on, only VMWare.

When I first did my testing on those builds, I used VirtualBox which installs all builds except 5308 and 5310 flawlessly without any errors (although you don't get Aero or those other goodies). I didn't encounter the Control Panel problem, but I did experience that on eHome builds, you need to either delete those files or choose the standard installer or it will fail as it tries to install the eHome features. BF10 (talk) 18:29, 19 April 2019 (UTC)

I do not encounter any problems on any of the eHome builds. (except 5284 of course).

So what could be stopping it in VirtualBox?

While in VMWare, these builds install effortlessly, with or without using the eHome installer. Arkan9 (talk) 18:38, 19 April 2019 (UTC)