Difference between revisions of "Timebomb"

Timebomb or time bomb is a software mechanism that renders a computer program unusable after a pre-set period of time. It is commonly seen in pre-release software, where it is used to discourage users from holding onto outdated testing versions. 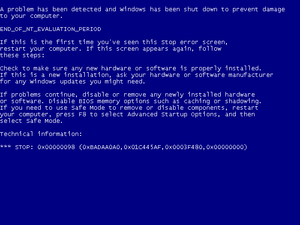 Windows showing a BSOD with the stop code of END_OF_NT_EVALUATION_PERIOD

In Windows 9x-based builds of Windows, the timebomb is activated by IO.SYS and MSDOS.SYS. Once the timebomb is triggered, Windows will display a message on boot saying the pre-evaluation period has expired. Windows will then immediately shut down and will not boot until the operating system is reinstalled with the correct BIOS date. Windows 95 build 216 is the first build to include a timebomb.

In NT-based Windows versions, once a timebomb is triggered, a bugcheck (BSOD) of 0x98, END_OF_NT_EVALUATION_PERIOD, is used. While Windows 2000 build 1627.1 is the first NT build with a timebomb, a Korean Beta of Windows NT 3.5 build 807.1 included concept of a timebomb as a message box that would change to tell the user to install a retail copy of Windows.

Most notably, most builds of Windows 10 version 1507 and 1511 have certificates on majority of the files. Should the timebomb activate, the bootloader will be broken due to expiring certificates.

The location of the timebomb in Windows 2000 is currently unknown.

Currently, only the Public Beta includes a timebomb. While the timebomb didn't allow the user to log into the user interface, it didn't affect the Darwin kernel or any other components not related to the Aqua interface.