Microsoft Windows debuted to the world on the Fall COMDEX 1983 computer expo as an operating environment running on top MS-DOS. The final version of the product with the version number of 1.01 was later released on 1985-11-20 and did not gain much popularity. Windows 1.0 was a cooperative multitasking desktop environment with a tiling window manager. The first versions of Windows used the MS-DOS Executive, which was a simple file manager, as a shell, which is generally the first application ran on startup providing the user experience. Other applications included in the first version of Windows included Calculator, Cardfile, Clipboard Viewer, Clock, Control Panel, Notepad, Reversi, Spooler, Terminal, and Microsoft Write. Three minor updates were released in the two following years adding support for more hardware. 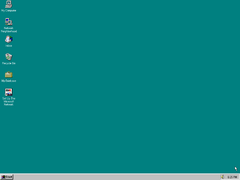 In 2004, incomplete copies of the source code of Windows NT 4.0 and Windows 2000 have appeared on the Internet. These leaks have been illegal, as the Windows source code is both a trade secret and copyrighted, and as so is protected by law. However, Microsoft has released parts of the source of the Windows Server 2003 kernel for research purposes.

In 2018, the source code of the Windows 3.x File Manager was released on GitHub under the MIT license.

Version: NT 5.50
Developed 1999, scheduled for release in 2000
Already in development before getting canceled