Difference between revisions of "Microsoft Windows"

Microsoft Windows is a family of operating systems developed by Microsoft since 1983. The latest version of 2018-07 is Windows 10 April 2018 Update.

Microsoft Windows debuted to the world on the Fall COMDEX 1983 computer expo as an operating environment running on top MS-DOS. The final version of the product with the version number of 1.01 was later released on 1985-11-20 and did not gain much popularity. Windows 1.0 was a cooperative multitasking desktop environment with a tiling window manager. Applications included in the first version of Windows included Calculator, Cardfile, Clipboard Viewer, Clock, Control Panel, MS-DOS Executive, Notepad, Reversi, Spooler, Terminal, and Microsoft Write. Three minor updates were released in the two following years adding support for more hardware.

Windows 3.0 was released in 1990 and it became the first widely successful version of Windows. The new features included a completely reworked Setup program and a new user interface centered around a new shell called the Program Manager. The previously separate 286 and 386 editions of Windows were unified into one. This version of Windows was able to operate in three modes: Real mode intended for computers with the original 8088/8086 processor, Standard mode using the protected mode feature of the 286 processor, and 386 Enhanced mode combining the improved protected mode of the 386 with its ability to create and manage virtual 8086 machines for MS-DOS applications.

A major update dubbed Windows 3.1 followed in 1992 with the brand new red-green-blue-yellow Windows logo resembling a flag. The user interface was refreshed in this release, including new colorful icons. This version of Windows removed the real mode of operation and the MS-DOS Executive application. It was accompanied with a variant called Windows for Workgroups (WfW) 3.1 with an integrated networking capability, which later received a larger update bringing its version number up to 3.11, introducing 32-bit disk access and also removing the Standard mode of operation. The regular variant of Windows also received the 3.11 update, however it only contained small bug fixes.

A 32-bit TCP/IP stack was ported from an early version of Windows 95 and released in 1994 as a downloadable plugin for WfW 3.11, providing early testing for the 16/32-bit compatibility features of the next version of Windows. 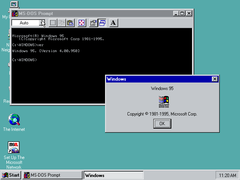 On 1995-08-24 Microsoft released Windows 95 also known under its codename "Chicago" with a brand new user interface with a Start menu, taskbar, and the desktop. Its hybrid 16/32-bit architecture made it possible to make and run 32-bit Windows applications and drivers while keeping a great degree of compatibility with already existing 16-bit ones. Among other improvements in this version was the support for long filenames through an extension to the FAT16 file system.

In 2000 Windows ME (Millennium Edition), the last release of the classic Windows line was released. It carried over the improvements made to the user interface in its NT-based counterpart, Windows 2000. Windows Me is based on Windows 98, however, access to the real mode MS-DOS was restricted in order to decrease boot time among other changes to the kernel. It was infamously known for its stability problems partially caused by the rushing of its release following the cancellation of the Neptune project. It was replaced by Windows XP in 2001, ending the era of classic Windows.

Windows NT (New Technology) is the current iteration of Windows. It is built on the NT hybrid kernel (hence the name), which was originally intended for use in OS/2 3.0 but was rewritten after the Microsoft - IBM split. The first release based on the new kernel was Windows NT 3.1, the version number of which was chosen to not be 1.0 to ensure potential customers don't consider it inferior to Windows 3.1, its DOS-based counterpart. All NT-based releases up until Windows 2000 were intended primarily for business use. With Windows XP, the NT series replaced the classic Windows series, creating a single operating system for consumers and businesses. Windows Phone 8 is the first Windows Phone release to be based on the NT kernel. The most recent version of Windows based on the NT kernel is Windows 10. Following the release of Windows 10, Microsoft has switched to a system of more frequent smaller updates to Windows.

Version: NT 5.50
Developed 1999, scheduled for release in 2000
Already in development before getting cancelled

Version: NT 6.00
According to antitrust documents it was already in development before getting cancelled in 2000-01.